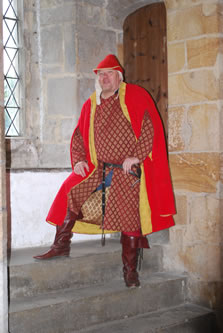 Armorial Bearing:
a fesse between six crosses crosslet or
Profile:
"Guy Earl of Warwick, who of all that are mentioned in my rhyme had not a better neighbour than himself, bore a red banner with a fess of gold and crusilly". Poem of the Siege of Carlaverock.
Guy Beauchamp was the second member of the Beauchamp family to become Earl of Warwick. With a power base largely in the midlands surrounding Warwick Castle he is one of the most powerful and wealthy barons in the land.
Born sometime in 1272 there is nothing known about his early life until 1296 at the age of 24 he is knighted in the spring. One year later he married Isabella de Clare, daughter of the Earl of Gloucester. Guy is described by his contemporaries as ‘bene literatus’, meaning a man of great education and intelligence. He is known to have owned several books – extremely valuable items – covering diverse subjects such as romance, surgery, history, religion and classics. By contrast to this well read and educated man we know he was a highly skilled soldier and serves at Falkirk and is present at the sieges of Carlaverock and Stirling.
In 1302 he starts divorce proceedings against Isabella – an unusual course of action for the period – but as no children had been born in five years of marriage Guy was obviously feeling the need to produce an heir. In 1310 he remarries Alice de Tony and they go on to produce six children in the next five years.
His opinions and experience are valued and sought by many of his peers and is one of the leading barons who oppose King Edward and Piers Gaveston, a Gascon and great favourite of the king. In contemporary reports he is seen as the chief architect of the ‘ordinances’ – a document forced upon the King in 1311 and by which the barons controlled the Kings power and exiled Gaveston.
Beauchamp and Gaveston are enemies from the very beginning of Edwards reign with Gaveston calling Beauchamp “the black dog of Arden”. It is reported that when Beauchamp heard this name he said ‘if he call me a dog, be sure that I will bite him so soon as I shall perceive my opportunity”. His opportunity would arise a year later when Gaveston returned from exile – Beauchamp seized the chance after the Earls of Pembroke and Warren along with Henry Percy had taken Gaveston by force from Scarborough Castle – he moved in and took Gaveston to Warwick, apparently riding a donkey all the way. After a hasty trial Gaveston was condemned to death and executed at Blacklow Hill – the nearest land to Warwick Castle belonging to Thomas, Earl of Lancaster.
Although Edward was undoubtedly upset by the death of Gaveston he makes no obvious moves against Beauchamp at this time and in 1313 is pardoned by the king for his part in the affair. As the war with Scotland rises to fever pitch in 1314 and Edward takes an army north, Beauchamp and Lancaster do not send men and do not attend. The subsequent defeat of the English at Bannockburn can only have lead Edward to blame Beauchamp and Lancaster.
A year later in 1315 Beauchamp falls ill and dies – a very convenient death for Edward – and contemporaries do speculate on the use of poison. He is buried at Bordsley Abbey with instructions to his family to perform the ceremony ‘without any great pomp’.
Go to top
JSN Boot template designed by JoomlaShine.com