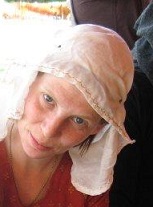 Profile:
Born the second daughter of Earl Richard Fitzalan & Countess Alesia in 1285, she married Sir Stephen Segrave in 1305 & bore a son John who would inherit his father’s title & lands at only 10 years of age when both his father & grandfather died in 1325 in Gascony, where they were serving Edward II during the War of Saint-Sardos. She remarried after Sir Stephens’s death Sir John de Bohun

Alice, Lady Segrave was accused in 1334 of entering an enclosure in Sherwood Forest with her greyhounds and poaching deer like her father before her, a claim she adamantly denies & I’m sure when you see her archery skills you will certainly know the truth.