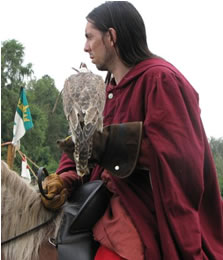 There is a little known of Urian de Saint Pierre (Urian de Sancto Pedro), the family had homes in Chepsyow & Malpas. He is one of the marcher lords entrusted to keep the Welsh under close eye. This duty may have been ironic considering his Welsh heritage.

His parents were Sir John de St Pierre & Katherine De Dutton, daughter of Sir Thomas de Dutton (Sherriff of Cheshire), and was one of their 2 children the other being David de St Pierre. Despite being the elder heir Welsh knights did not automatically receive the title and lands, but received an equal share. This created a sibling feud, but Urian took up the family home.

Sir Urien held the passage of Tarporley & Kelsall where the high road emerges from Delamere Forest, by service and guarded the road at times of market at Chester.

Of the few facts that we know of him is that he Bore the above arms at the Dunstable Tournee of 1308.

A reference within the Lancs & Cheshire Record Society has the following reference:
"1306 May 22 Urianus de Sancto Petro made Knight of the Bath, one of 267, on the occasion of the knighting of Edward Prince of Wales, afterwards Edward II 1307-1327".

Within Tournée, Sir Urian de St Pierre is played by Gareth Evans. Gareth has been in re-enactment for almost twenty five years. As well as both mounted and foot combat, he is also an accomplished archer.