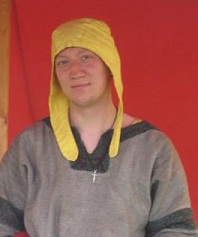 Profile:
A country knight from just outside Horncastle in Lincolnshire, Sir William has a rustic background and limited means.

Sir William's father Sir Robert was the first of the family to be raised to knighthood, and is keen to see his son progress up the social ladder.

He does not have the most modern of armour, and can ill afford to lose it in the tournament, but is eager to fight. Perhaps his prowess will help to win him the patronage of a great lord, or at least help to fund his tourneying and entertainments. While a loyal supporter of the king, and realising the potential for advancement, Hawley is not sure quite how much royal attention he wishes to draw to himself given his pastoral origins.

Embarrassed by his illiteracy, if successful he plans to help fund a school near his home as it's frustrating not to be able to read the Caerlaverock poem and quote bits of it at people.

Sir William is played by Philip Howard, who is from Lincolnshire and attended a certain school first established around 1327 - for which he blames his interest in history and consequent involvement in re-enactment.