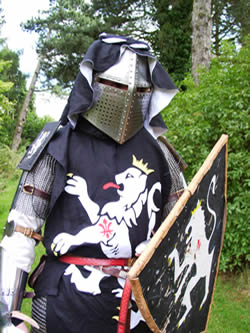 Armorial Bearing:
Sable, a lion argent, armed and crowned or, langed gules, on the shoulder a fleur-de-lis of the fourth.

Profile:
Named after his great grandfather, Sir Stephen is currently the leader of the King's faction having quickly realised that Edward has a lot to gain and little to lose by pulling the teeth of the Barons.

Stephen grew up with the sound of battle in his ears and lived his life in the company of soldiers. In support of the noble King Edward, he went to Ireland and Scotland, learning the knightly arts at his father's side. Longing to join the heat of the battle, Stephen was forced to watch from the safety of the baggage train.

In 1291 the Segrave family were summoned to Scotland again to reinforce the will of King Edward in his claim of over-lordship of the kingdom. The crowning of John Balliol as King of Scotland in 1292 brought an unsteady peace between the two nations, and so the family returned to Leicestershire and the Castle Caludon, whilst the King pursued his wars against the French.

In 1295 at the age of 15, Stephen attended his grandfather to Parliament. The greatest of honours were bestowed upon the family, as Sir Nicholas became Baron Segrave. Only months later his grandfather died and Stephen himself became heir to the Barony. As if this year could not get better, Stephen at last had the opportunity to show his fighting mettle. Balliol refused to support the King's demands for help against France and raised his standard to rally the Scottish people. Stephen for the first time joined the King's army in his own right. At last the years of watching were over, the town of Berwick on Tweed stood before him in defiance and the King laid siege. Defiance could not be born and the King ordered the sack of the town. All were put to the sword and Stephen gained his first taste of victory. The taste was sweet.

Over the next few years Stephen served the King with his father. Not yet old enough to be knighted, the years of campaigning had taught him well. Supporting his father, who had been appointed as an army commander at the battle of Falkirk and at the siege of Carlaverock Castle, the nature of war soon became instinctive. A witness to both the joy of victory and the bitterness of defeat, nothing brought this home better than when, in 1302, his father (then the Keeper of Scotland) was ambushed, wounded and captured. Discovering where his father was held, Stephen finally stepped out of the shadows to lead a rescue party and successfully released his father.

In 1305 the Segraves came face to face with the chief brigand himself. William Wallace was given into their custody after the noble still loyal to Edward arranged for his capture. The Segraves escorted Wallace to London and witnessed his deserved execution. Stephen realised that this was the turning point in his life and the following year in April the King choose him, among many others, to be knighted along with his own son, Prince Edward, at the Palace of Westminster. That year saw the English yet again in Scotland, as Robert the Bruce raised his banner and claimed the kingship of Scotland in his own right. Edward bent on revenge at such treason led an army north to crush this rebellion once and for all. Stephen took his own banner to war for the first time and won the spurs he had newly been given.

Sir Stephen de Segrave, married Rohesia, daughter of Thomas De Spencer and in 1203 he was Constable of the Tower of London and a prominent judge. In 1232 he was made Chief Justicar and acted as one of the King's Regents. After accompanying Randulf De Bluderville the Earl of Chester on a trip to the Holy land Stephen De Segrave was given Caludon (Calladan) castle with a rent of one sparrowhawk a year.

Sir Gilbert de Segrave, succeeded his father Stephen in 1241, married Annabele de Chaucombe. In 1242 he was appointed Governor of Kenilworth Castle and became judge for the City of London in 1251. He fell ill and died in prison in 1254 after he accompanied Henry III to Gascony and was seized by the French at Pons in Poitou.

Baron Nicholas de Segrave succeeded his father Gilbert and married Matilda, daughter of Baron de Lucy, a great Leicestershire landowner. He attached himself to Simon de Montfort in his rebellion and in 1263 was knighted by Henry III. He commanded the left flank of Simon de Montfort's army at the Battle of Lewes. The Segrave family were elevated to the Peerage in 1283 when Nicholas was summoned to Parliament as Baron Segrave. Wounded and taken prisoner at the Battle of Evesham, Nicholas died in 1295.

Baron John De Segrave born 1256 was made Baron Segrave following the death of his father. He signed and sealed the Baron's Letter to the Pope in 1301. John led the English to defeat at the battle of Roslin in 1303 however this does not seemed to have effect him too badly as he was given permission to fortify and add a moat to Caludon castle by King Edward I in 1305.

Sir Stephen is played by Steve Ward, an experienced re-enactor and self proclaimed poser. Steve says:

"Although not a great deal is known of Sir Stephen, like where and when he died, he is the ideal opportunity to play the bad guy. What could be better? Dressed in black and with an attitude!".