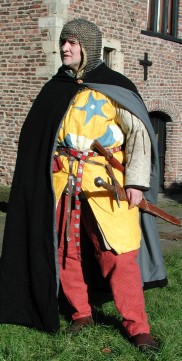 History:
It is surprising to see the name "Lorimer" in a knightly context, as it denotes a maker of spurs for horsemen. In this case, the name is all too closely tied to the profession, as young Milo's father was lorimer to King Edward I, and served him well both at court and on campaign.

On the coronation of Edward II, almost 300 young squires and others were created knights, apparently taking advantage of the tradition of making new knights as the first act of a new royal reign. However, the number of knights created, and the scandalous inclusion of many of non-noble birth shocked the nobility, and the elevation of the son of a royal servant caused outrage.

Undeterred, Milo has set about repaying the King's generosity, being privately tutored in the arts of war, and showing a remarkable ability for one so recently introduced to the sword. In typical fashion, Milo's arms are a pun on his name, taking the mullets (or spur wheels) to represent the career of his father.

Milo is played by Cathy Murphy, a re-enactor with over twenty five years experience, who enjoys the shocked looks when she removes her helmet after beating Segrave to the floor and the watchers realise that all is not as it seemed.